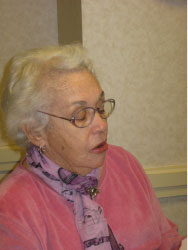 Clear, beautiful, sparkling glass. A symbol of my parents’ love for each other. A 25th Anniversary gift. Their quiet, constant love for each other.
My father’s undemonstrative manner, his unexpected low-­‐key humor: An
ad in a magazine—a fabulously expensive Tiffany bracelet—
which noted tax included—My father’s comment dryly,
“What a bargain. You don’t have to pay
tax.” My mother’s response: “I’d rather
have that.” A picture of the bowl
on the next page.
It served as a surprise
for their next anniversary.
It is now mine. I cherish it as a symbol
of love, constancy, surprise, and caring.